One sign it’s time for AC replacement is your system still uses R22 refrigerant. Also known as Freon, R22 was banned due to its contribution to ozone layer depletion and ecological harm. Freon is becoming scarcer and more expensive as a result. Its replacement, R410A, is more environmentally friendly, but cannot be substituted for R22. We’ll explain below what happens if you put R410A in an R22 system and what your options may be.

If you haven’t yet replaced your air conditioner, or are concerned about the cost of doing so, here’s what you need to know:

Compared to an R22 system, an R410A air conditioner runs at a higher pressure. It operates at about 130 pounds per square inch (psi). In AC mode, an R22 evaporator coil will run at about 70 psi. Therefore, newer systems run at nearly double the pressure, assuming they’re operating under the same conditions.

Since R410A refrigerant is charged under higher pressure, charging an R22 system with it will increase the force within the lines. The pressure can become high enough for parts of the system to rupture. At the very least, leaks will occur. Mixing refrigerants is not an option either. This will contaminate the system and the R22 will not evaporate under the higher suction pressure that R410A requires.

An HVAC System Must Be Retrofitted

The length of the refrigerant lines is different as well. An R22 condenser is designed for a 15-foot line set. However, an R410A refrigerant system has lines of 25 to 50 feet in length. To use the new refrigerant, an older system must be retrofitted. The system must be cleaned and flushed out and then purged with nitrogen; any remaining chemicals or contaminants are then removed.

A new refrigerant line set, filter drier, and thermostatic expansion valve must be installed. Several other steps must be completed before the system can be recharged with R410A refrigerant.

It’s generally not recommended to mix and match components. Matching an R22 coil with an R410A condensing unit is not possible with an outdoor heat pump. An old coil brazed with tin and antimony should never be reused (this process was discontinued in the 1950s, so the system would probably be too old or worn out anyway).

Should I Retrofit or Replace My Aging AC System?

If you still have an R22 system and it has no leaks or major issues, you don’t have to replace it. But while retrofitting might be an option, it’s not going to save you money. This costs thousands of dollars and perhaps not less than installing a new air conditioner given the parts, expertise, and labor needed to do a retrofit.

Consider the potential for future repairs with an older system as well. Installing a new AC avoids repair calls and increases efficiency. Therefore, when faced with the choice of retrofitting or replacing a unit, a replacement is typically more cost-effective in the long run. You’ll also avoid what happens if you put R410A in an R22 system.

Olympia-area homeowners rely on Black Hills for professional HVAC installation and replacement. We can help decide if fixing or replacing an aging air conditioner is a better idea. Our staff is trained to install the latest equipment, including ductless mini-split air conditioners. In addition to properly installing high-quality, efficient ACs, we specialize in repair and maintenance. For assistance, send us a message online or call 888-688-7358. 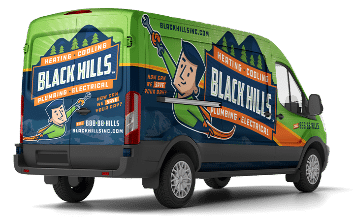